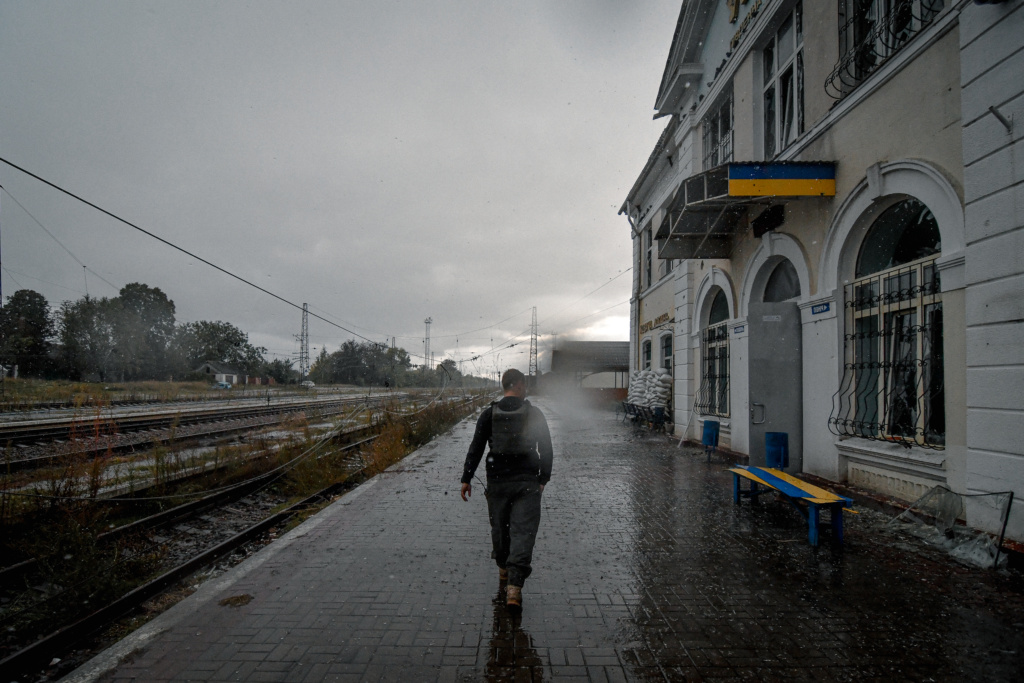 The lights are on 24/7 at one location in Kozachy Lopan, a small town in the far northeast of the Kharkiv region. Electricity is out almost everywhere but, inside a moderately damaged school building, Maryna Sadykova and her team of volunteers are hard at work. Thanks to the Kremlin, the volunteers and the fortunes of war, the daily bread of the village is golden, steaming and ready to come out of the ovens.

Baker Maryna Sadykova describes the production process of a volunteer-run bakery in the town of Kozachy Lopan in the northeastern region of Kharkiv. She runs a two-shift operation that bakes an average of 1,200 loaves. Kozachy Lopan is off the grid and comes under frequent mortar fire from the Russian Federation (RF). Photo by Stefan Korshak/Kyiv Post

“I can’t say anything against this Russian equipment. It’s reliable. It’s easy to use. It cooks fast, and without it we wouldn’t feed our people,” Sadykova told the Kyiv Post on September 25. “We made bread while they (the Russian troops) were here, and now that they’re gone, that hasn’t changed. We have hundreds of people in our village. All stores are closed and people have no way to get fresh food. It is up to us to give them fresh bread.

The center of Kozachy Lopan is – at the flight of the Grad rocket – about ten kilometers from the Russian border. The northern end of the village is less than three kilometers from the international border. After shelling the village for five days and demolishing much of the main street and train station, and blowing up farm houses on high ground near Russia, Russian army tanks and armored personnel carriers troops entered Kozachy Lopan in early March.

Local residents said the first wave of invading troops were mainly Slavic and kept moving. The next wave, consisting mainly of Ossetian soldiers and Russian police from Rosgvardia, arrived later, taking over the village council building and launching a hunt for local officials, former members of the Armed Forces of Ukraine (AFU), to sympathetic Kyiv civilians and, if possible, partisans. Instead of repairing the also damaged village school, the Russians turned it into a warehouse. Totally cut off from the Ukrainian economy, with no other means of eating, the villagers soon found themselves there daily, for food distributions.

Sadykova, 32, grew up in the village but was living elsewhere at the time of the invasion. Like many Ukrainians eventually forced to live under Russian occupation, she had the option of escaping to Kyiv-controlled territory, but instead returned to the family home to care for an ailing relative.

An experienced baker and trained cook, Sadykova was immediately unemployed when the food processing company she worked for closed after the invasion. She told the Kyiv Post that she, like “virtually everyone” in Kozachy Lopan, is absolutely pro-Ukrainian and anti-Kremlin, but she could not let the people of the village starve and: “I just couldn’t stay home doing nothing. “Most of those left in the village were, she says, women and children, or couples well over retirement age. Freshly baked loaves of bread cool next to a stack of flour sacks made by the Russian Federation in the Ukrainian town of Kozachy Lopan, about ten kilometers from the Russian border in the northeastern region of Kharkiv . Kozachy Lopan is badly damaged and is cut off from the network, water supply and telephone service. A volunteer-run bakery, housed in the remains of the town school, is the only building in Kozachy Lopan with enough generators and fuel to provide continuous electricity and heating. Photo by Stefan Korshak/Kyiv Post

“To survive, people first need bread,” Sadykova said. “It’s the most important food.” The opinion is widely held in Ukraine, especially in the countryside.

Local residents described, overall, a relatively benign RF occupation of Kozachy Lopan. For the most part, the Ossetian troops camping around the village were peaceful and would only have barged into homes for food, money, or jewelry. Iryna Vasylieva (71), owner of a house in the northern part of the village, said she fought off a band of armed marauders, telling them, in Russian, that their mothers would be ashamed of their behavior.

In the heart of the Kharkiv region, most residents of Kozachy Lopan speak Russian as their first language and Ukrainian according to their individual upbringing. Vasylieva spoke to a Kyiv Post reporter in Russian laced with a Ukrainian word or two, while Sadykova – the daughter of a Ukrainian mother and a Tartar father – alternated fluently between the two languages. 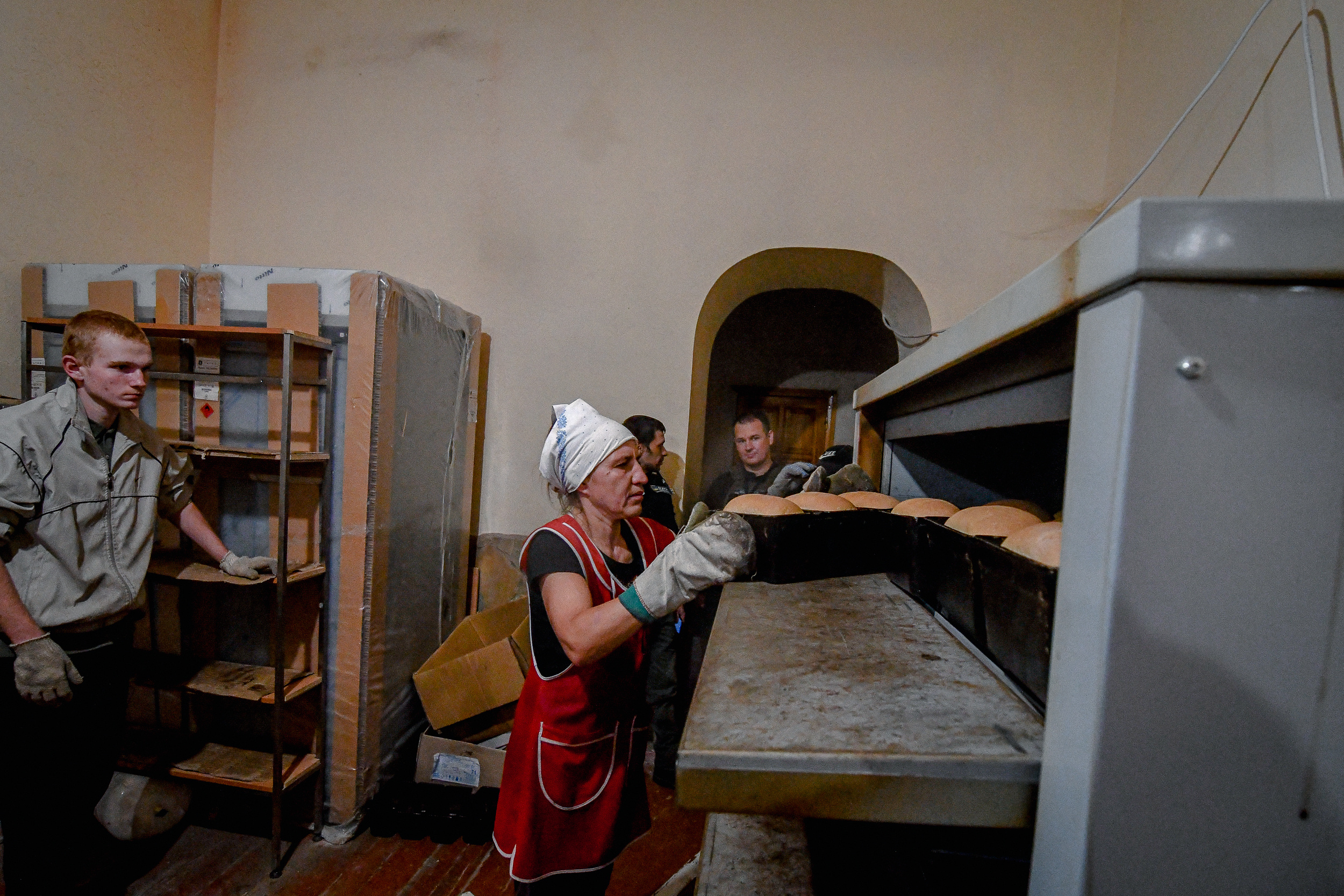 Volunteer Maryna Sadykova takes out hot loaves of bread from an oven in the town of Kozachy Lopan. The cooking ovens used in his operation were brought to the village by RF authorities after the Kremlin invaded Ukraine on February 24. RF troops abandoned the village on September 11. Photo by Stefan Korshak/Kyiv Post

Vasylieva and Sadykova said they heard rumors about an interrogation cell run by Russian police in the center of the village. Neither knew of any villagers abducted by Russian authorities. A Kyiv Post team then inspected a basement near the village council building with what appeared to be a holding cell inside, but it could not be said whether any prisoners had been held there. .

Vasylieva and Sadykova said that the worst moment of the war was the beginning because of the inhabitants of the village killed and injured by Russian shelling. The second worst was the Russian retreat, as fire between the Russians and the AFU knocked out the power grid.

That’s why, Sadykova said, the village bakery is the hottest and probably the only continuously lit building in town. The dough needs stable ambient temperatures to rise evenly, and even with virtually all men and most people with money, there are still over two thousand people living in Kozachy Lopan. It takes the three bread ovens constantly working two daily shifts to bake the roughly 1,200 loaves of bread people eat every day, she said. Volunteer baker Maryna Sadykova showcases high-quality flour made in the Tomsk region of the Russian Federation, and now stocked in a volunteer-run Ukrainian bakery in the village of Kozachy Lopan. According to Sadykova, the Russians delivered nearly a wagonload’s worth of flour (40 tons), enough to supply Kozachy Lopan with fresh bread for months. Photo by Stefan Korshak/Kyiv Post

Kharkiv-based volunteers purchased and delivered generators to operate the Russian-made ovens. Since between the ovens and the dough the power must be constantly turned on, microbuses driven by volunteers deliver jerrycans of diesel to Kozachy Lopan for the generators about once a week. All of this – fuel, generators, jerry cans, vehicles, drivers – is paid for by cash donations, mainly from other Ukrainians to welfare groups.

Flour, on the other hand, is not a problem: apparently the Russians left tons of it. Kozachy Lopan can count on getting his bread for at least the next two months, Sadykova said. 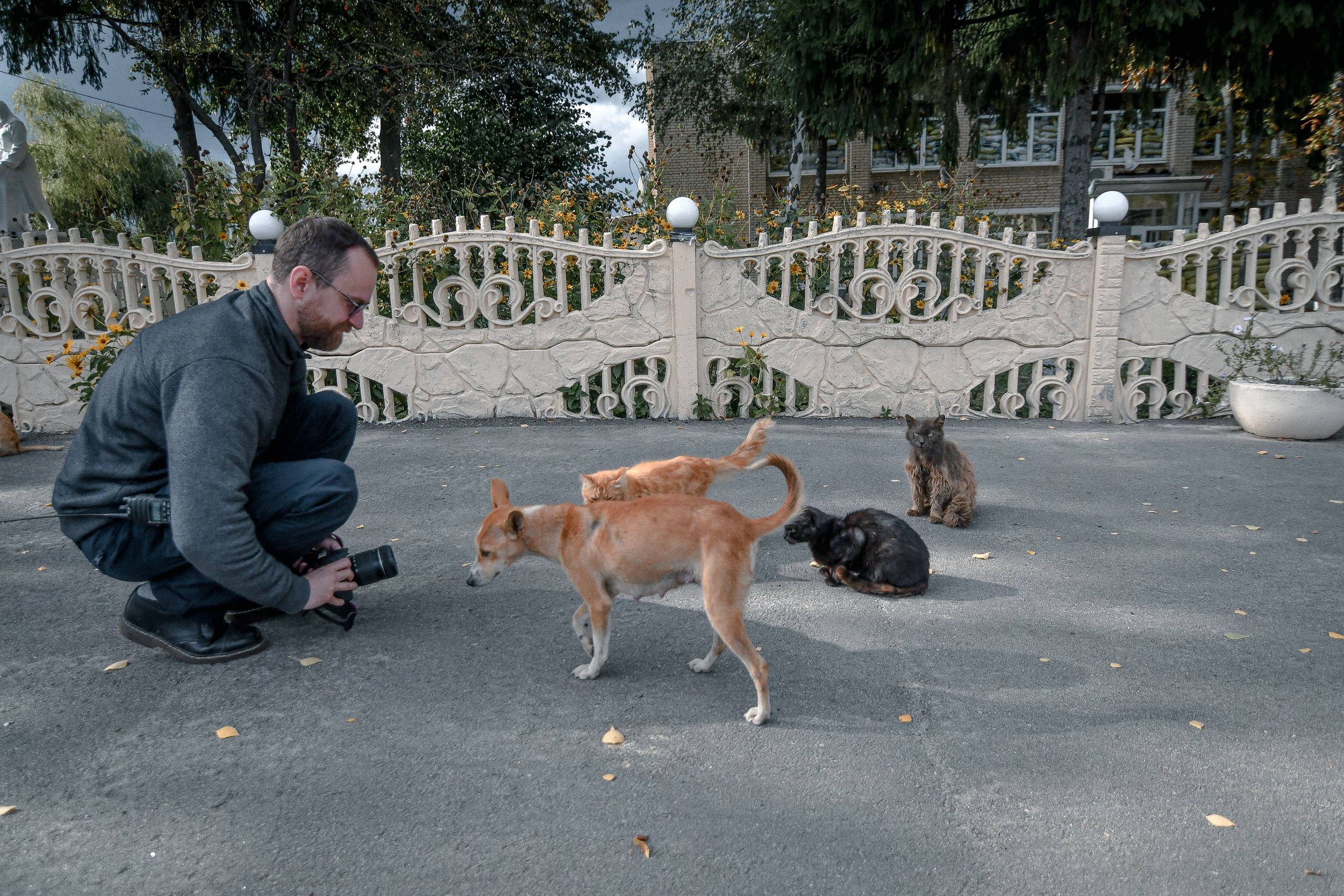 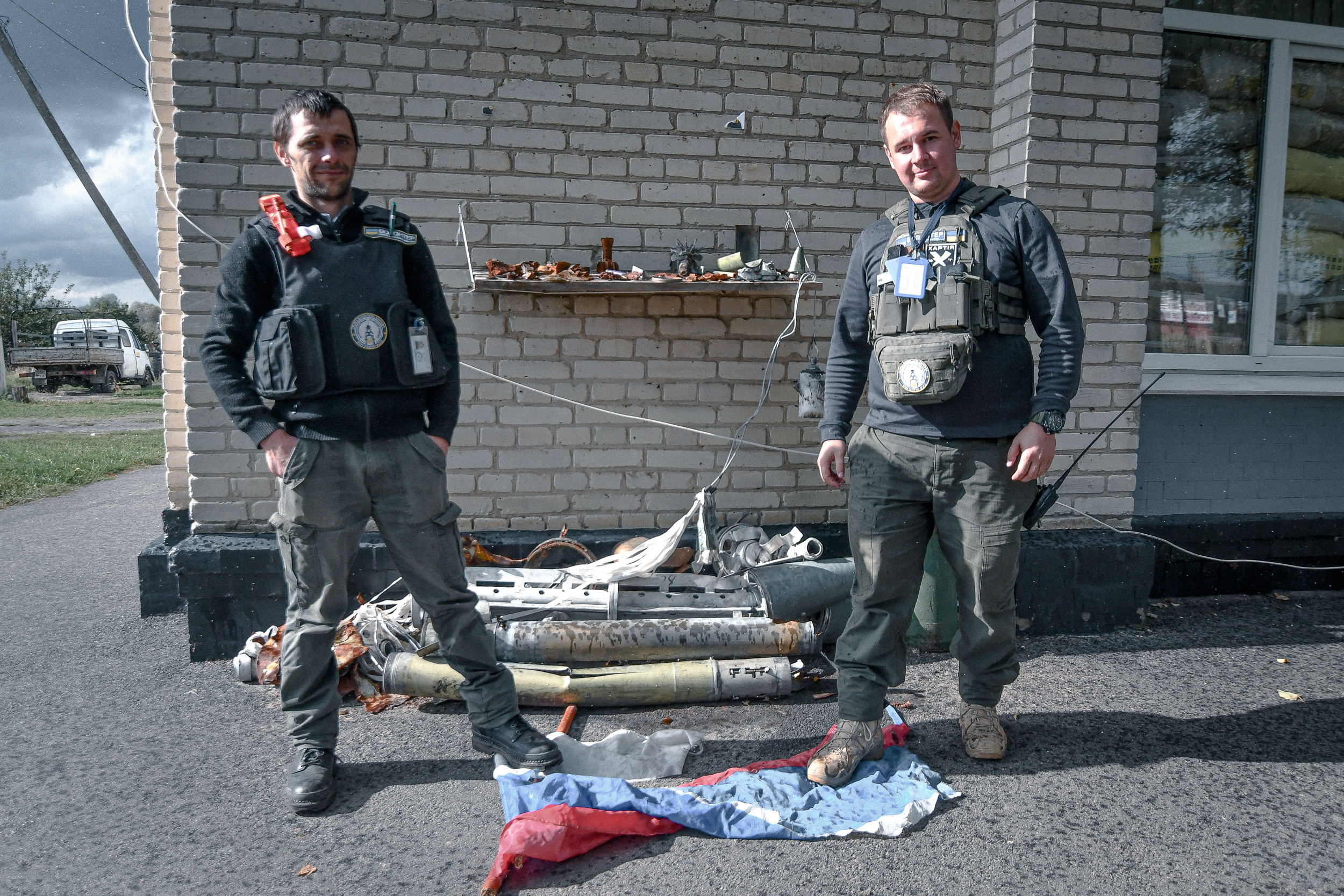 An unidentified Kharkiv volunteer, left, and Kharkiv volunteer team leader Mykola Zinoviev, right, pose next to an abandoned flag of the Russian Federation (RF) and debris from fired RF ammunition on the town of Kozachy Lopan. Mykola Zinoviev, leader of the Kharkiv volunteer team, points to sleeping materials for a possible RF detention cell in the basement of an apartment building in the town of Kozachy Lopan.

Empty beer bottles and trash litter a basement used by RF troops in the town of Kozachy Lopan. Russian soldiers entered the village in early March and abandoned it on September 11. 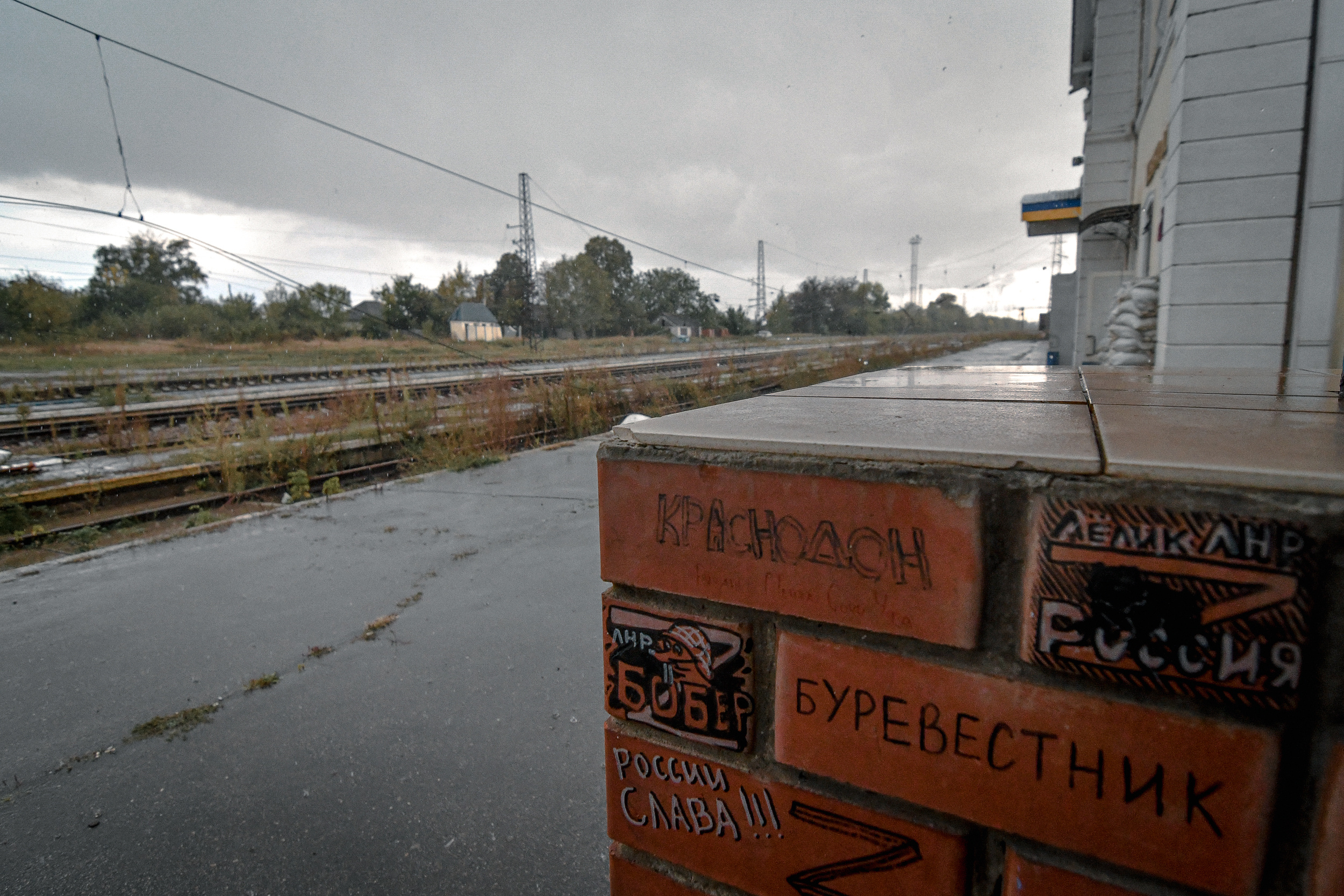 Russian artillery and mortar strikes severely damaged the station in the village of Kozachy Lopan in the early days of the invasion. Russian troops abandoned the city in early September, leaving graffiti (lower right) in some places. 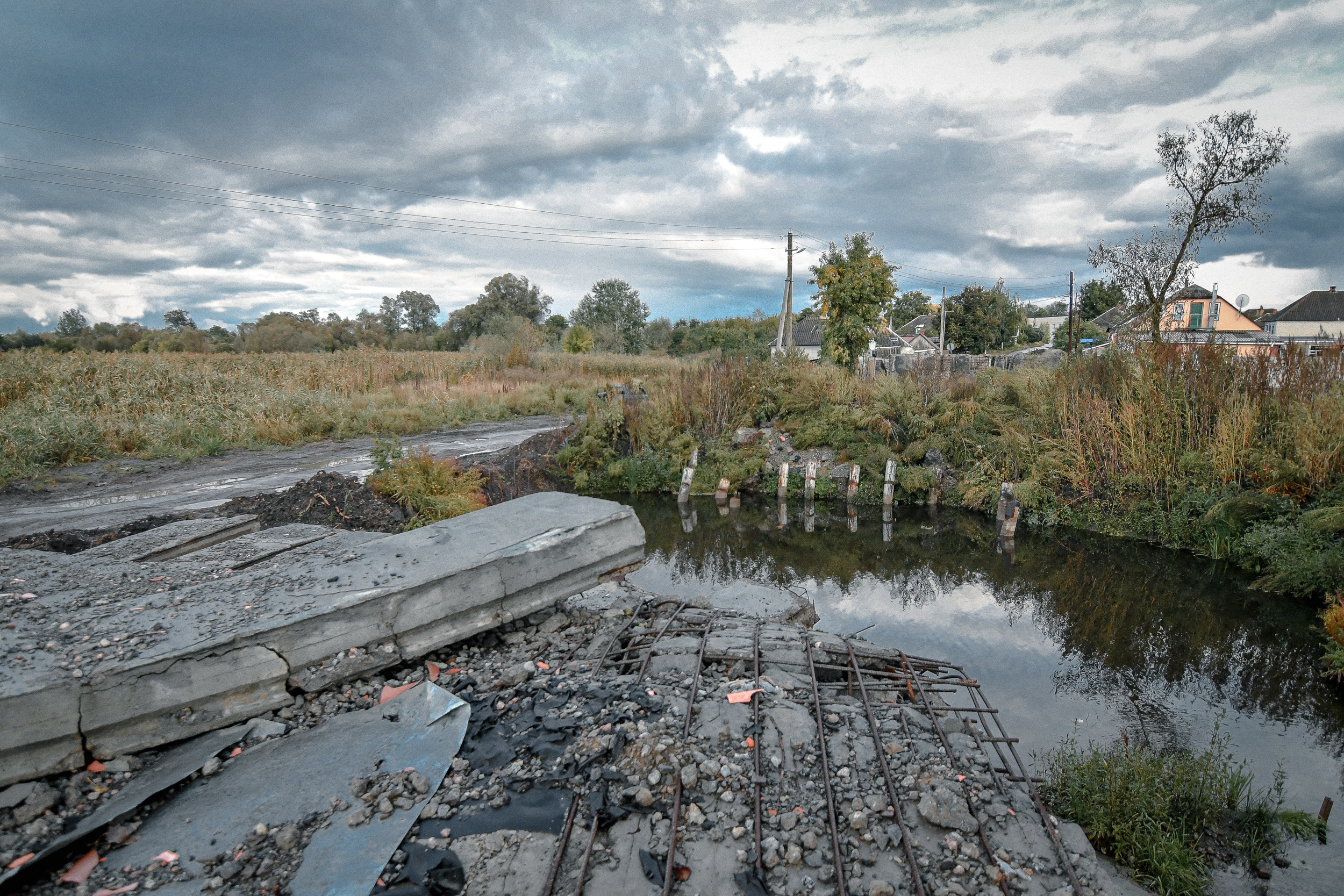 – View of the road bridge destroyed by Ukrainian troops defending the town of Kozachy Lopan in late February in an unsuccessful attempt to stop invading Russian troops. 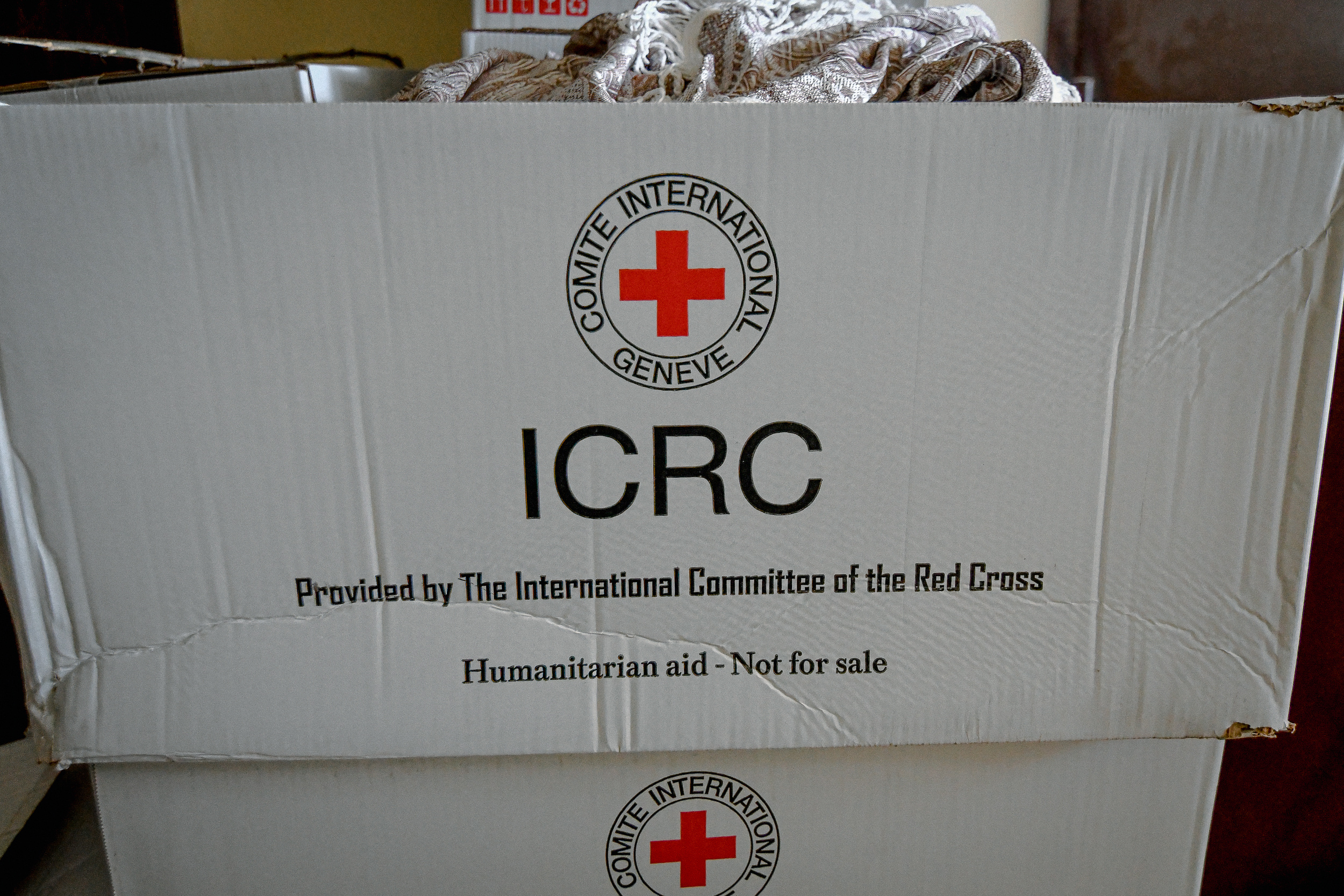 – Bags of animal feed are used as fortification materials around the village council building in the town of Kozachy Lopan, in the Kharkiv region of northeastern Ukraine. Liberated on September 12, Kozachy Lopan is under regular fire from RF artillery and mortars on the other side of the Russian border, about ten kilometers away.
2022-09-29
Previous Post: PetroNeft Resources: Annual Report 2021
Next Post: Istanbul hosts the 2nd Azerbaijan-Türkiye Energy Forum