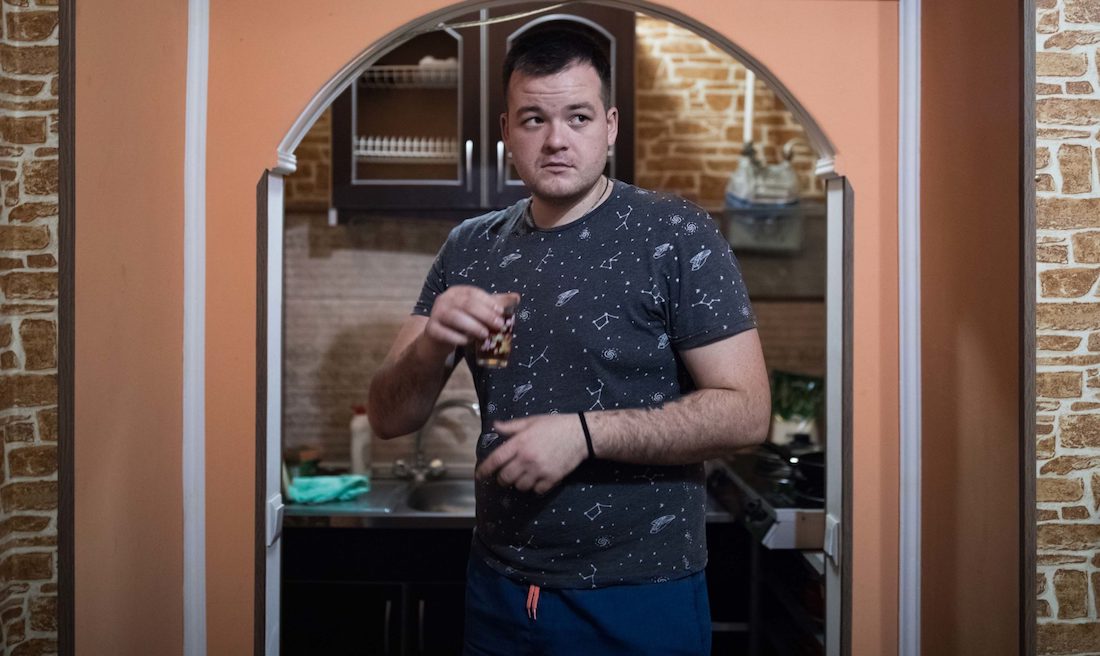 Sergei Samborsky fled to Georgia after checking into Covid hospital

Sergei Samborsky, 27, from the Russian city of Tomsk, rose to fame across Russia at the end of October. He infiltrated the hospital to take care of his grandmother with coronavirus and filmed the terrible conditions in which the Covid patients were placed. Sergei tried to tell the truth about the pandemic situation in Russia. For this, the authorities began to persecute him, and Sergei was forced to flee to Georgia. Sergei shared his story with Codastory in Tbilisi.

Sergei’s grandmother was 84 years old, she suffered from Alzheimer’s disease. The partially paralyzed woman was completely dependent on the care of her grandson, who looked after her every day. On October 21, she suddenly felt unwell, an ambulance took her to the clinic.

Sergei recounts what he saw in the hospital when he went to visit his grandmother, and what followed.

She was in a five-bed ward, all the patients had Covid. The doctor said she needed oxygen. I jotted down the phone number of a woman, her roommate, and left after about an hour. The next day, I called this woman. She said no one came to my grandmother’s house. No one fed her, washed her or changed her diapers. The bedsores were not treated, she was not fed, she was given only one syringe of water.

I am an impulsive person, I was immediately seized by feelings, emotions, I immediately ran there, right away.

I asked the doctor to let me go normally, I was ready to get sick, to sign all the papers. He assured me that everything was fine with my grandmother and that everything would be fine. I walked out and watched the orderlies come out into the street wearing the same clothes they wore inside the hospital, smoke and come back with dirty shoe covers. There was an ambulance, I bought them a protective suit. Of course, they are not allowed to sell it, but this protective suit costs 400 rubles, and they sold it to me for a thousand. It’s Russia.

I went behind the building, changed my clothes, took it and walked through. There was no security, the door was open, I started filming, but no one looked at me askance. I asked someone, “Where?”, they said “there”, and that was it.

When I arrived at my grandmother’s, I was terrified. She was in the common room, tied up, her whole arm bruised, she had lumps from the bandages. Oxygen mask on forehead, dirty diaper, bedsores just anointed with red garbage, that’s it. She had three bedsores: one on her knee and two on her thighs. The right dressing was changed, but the left one, they didn’t even return it, the left one was old.

How can we explain it? It’s indifference, laziness. And this is no exception. It happens in hospitals all over Russia, thousands of people have written to me, sharing their stories.

I spent eight or nine hours in the room. I went out and mostly hid myself so they wouldn’t ask me anything more. Somewhere a woman asked me to bring her water, there I straightened the bed linen and picked up the garbage.

Sunday October 25 was my last day in the hospital. I went here. They had already understood that it was me. I sat on my grandmother’s bed. She said to me: “Seryoja, I love you”. She recognized me for a few seconds, before that she didn’t remember me for three years. It was worth it.

I sent the video to the local channel TV2. In two or three days, my story spread throughout Russia. At the beginning, I remained anonymous, they called me “the grandson of Tomsk”. After TV2 published my story, the police confiscated their tapes and called editor-in-chief Alexander Sakalov for questioning.

I thought Moscow would help. I flew to Moscow because it was the last bastion of hope.

It was my first time in Moscow. I got into debt to fly there, because I had no money. I came to the investigation committee, I showed them the video. They told me, “You can, of course, write a statement, but it will take at least a month to get any response.” I offered to watch the video, said I was willing to provide videos and photographs, and they just said, “And what will that accomplish?”

After the commission of inquiry, I went to the attorney general’s office. There was a female prosecutor, she helped a lot, she immediately ran to talk about it with her colleagues. Half an hour later they called me from Tomsk and said, “Why didn’t you contact us?”. I went to the presidential administration, wrote a statement there. They sent me replies from everywhere.

While in Moscow, my story became national news. I was very offended by the REN-TV channel, they are the worst of all, a disgusting channel, because I had an agreement with them that they would not leak my data – they would blur my face, face of my grandmother, all the parts of my body.

They posted everything without censorship. The state channels, pro-Russian, controlled by the authorities, did it on purpose to denigrate me. I was accused of doing all this for my grandmother’s boarding house, of beating her, chaining her to a radiator, of starving her, of holding her like a prisoner. All because I revealed the truth about medical care in Tomsk, Russia, and the truth about the authorities.

Now they are trying in every way to drown me.

My story made people think that their loved ones did not die from disease, but from the indifference of their caregivers.

That says it all. I’m not surprised. Because here in Russia, if people have one reason to eat you, they will.

Back in Tomsk, the same evening, I was summoned for questioning by the local commission of inquiry. They asked me to give them my phone and said they suspected the video was edited, I edited the footage and made it all up. They threatened me with arrest and search, but I refused to give them the phone.

Grandmother was a child of war, she was starving, she was exiled, she was repressed. At least some respect should have been shown for past mistakes. What hypocrisy and corruption.

I spoke to a person who works in state structures. He hinted that I should leave, as they are discussing the possibility of starting a criminal case against me. I buried my grandmother and left immediately afterwards.

Georgia: I can’t get used to the kindness of the police

I’m already in Georgia, but I don’t feel safe here either, because my relatives didn’t come to see me. Three people came to me and suggested that I return to my native country. They weren’t my friends, and I don’t think my friends would invite me to my home country. These are people who are somehow linked to the authorities.

I am a Russian person, I am afraid of the police. I still can’t get used to the fact that the police here are nice. When I hear the police sirens in the street, I immediately tense up. These are echoes of Russia.

I hadn’t planned to go anywhere at all. It was not that everything suited me, I felt calm, I was sure that I could pay for the communal apartment, earn money, buy food, refuel the car. I thought my grandmother would die peacefully at home, as planned, in a dream, maybe that was her dream too. And in the end, she died in an environment not even worthy of a dog.

Today I turned 27. I hope it’s not my last birthday. I hope that I will celebrate my other birthdays in general.

The material has been prepared with the support of “Mediaset”

2021-12-15
Previous Post: Opening of a center for the development and assessment of engineering management skills in Tomsk – Society and culture
Next Post: Ice sculptors transform a Russian town into a winter wonderland