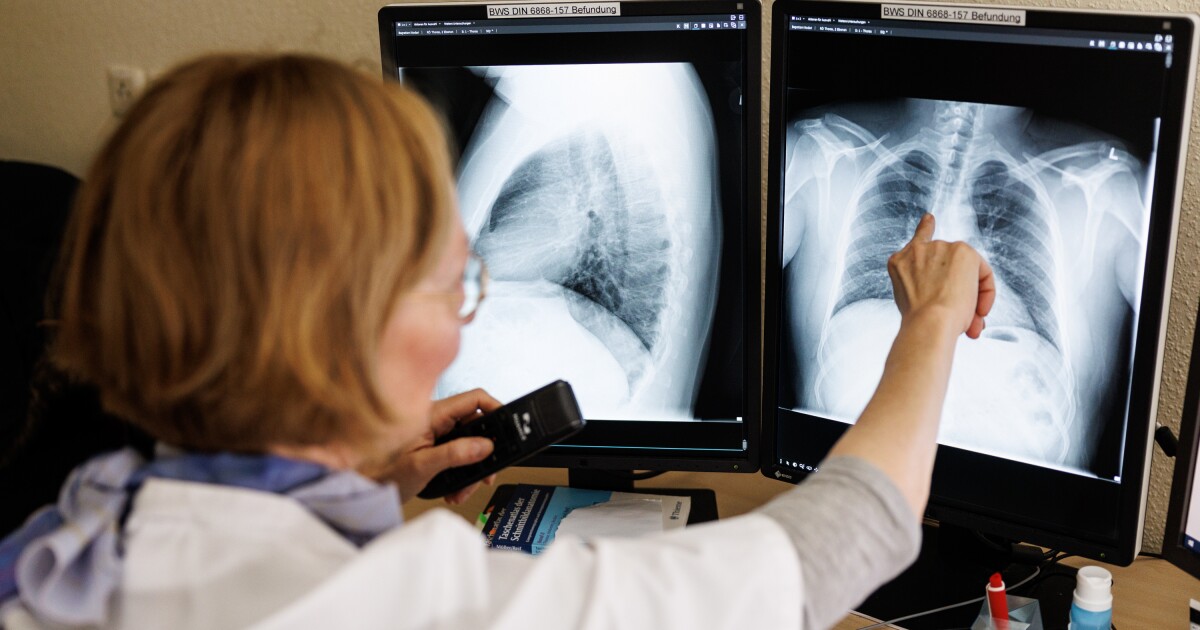 “We have 20 patients that we cannot find, so we don’t know if they are alive or not,” says Dr Olha Konstantynovska.

She is referring to the tuberculosis patients she cares for in Kharkiv, where, as in much of Ukraine, the Russian war has upended lives, including her own. She and her three daughters were evacuated to her father’s house about 20 miles away after a bomb hit a building down the street from their apartment.

Tuberculosis, a serious bacterial infection of the lungs, is a big problem in Ukraine. According to the World Health Organization, the country has the fourth highest incidence of the disease in Europe. And it has one of the highest rates of multidrug-resistant tuberculosis in the world.

At the Kharkiv Tuberculosis Hospital, where Konstantynovska treats tuberculosis patients, about 70 of the 200 residential beds are occupied. This is because at the start of the war, his team sent as many people back as possible to allow them to evacuate.

“I called the hospital to speak to a doctor and she told me the hospital had no potatoes or bread,” Konstantynovska said. “We have medicine, but we don’t have food.”

She says that before the war “the people of the whole city of Kharkiv – two and a half million citizens – [went] to this clinic to be checked for tuberculosis. “It is also where people with TB could receive medicine, treatment and even surgery if needed. was supported by the government.

But now Konstantynovska says doctors are having trouble getting to Kharkiv hospital. It is too dangerous to travel outside and the roads are ravaged. One of the doctors walks a total of three hours a day to and from work. The head of a local dispensary lives in his office because his apartment was destroyed.

Without intervention, people can live with TB—and spread it, through the air—for years. At some point, however, usually due to stress from hunger and injury; or a weakened immune system, it can become fatal. Treatment consists of a course of antibiotics that lasts from six months to two years.

The contagiousness of tuberculosis is the reason why Konstantynovska is particularly worried about these missing patients. If they are on the move, she says, they take their TB with them, giving the disease more opportunity to spread through the air. “Eleven patients are currently in other regions of Ukraine,” she adds. “They try to find the drug because they quit[ped] treatment two weeks ago.”

Discontinuation of antibiotic treatment for tuberculosis is worrisome for two reasons. First, drugs prevent someone from infecting others. Thus, without medication, the disease is more likely to spread. And second, TB can become unresponsive to drugs if they are not taken regularly because underdosing gives the TB bacteria time to mutate, selecting for populations of the insect that can evade drugs. This is called multidrug-resistant tuberculosis.

There is even extensively drug-resistant tuberculosis when the bacteria does not respond to first- or second-line drugs. And once this resistant form of TB appears, it can be transmitted from person to person, transmitted through the air, just like regular TB. In 2020, a third of TB cases in Ukraine were drug resistant, one of the highest rates in the world. And that number is likely to grow.

That’s why Loyce Pace, assistant secretary for global affairs at the U.S. Department of Health and Human Services, said his office is coordinating with the CDC and USAID “to track patients [within and beyond Ukraine] to understand where they are, what they need in terms of medications and make sure there is no gap.”

The history of tuberculosis in Ukraine

To understand why Ukraine has so many cases of tuberculosis, we have to go back a hundred years.

For much of the 20th century, when Ukraine was a republic of the former Soviet Union, TB was pretty well managed, according to Tom Nicholson, executive director of the nonprofit Advanced Access and Delivery. “The medical care system was quite comprehensive and was based on community medicine,” he says. “He had a system of rural health posts, even in the most remote areas.” There may not have been doctors on site, but there were often nurses and medical technicians who could do chest X-rays to screen for TB and deliver drugs to treat it.

The situation deteriorated with the collapse of the former Soviet Union in 1991. The economy of its republics collapsed. Unemployment soared. Crime escalated, sending many people to jail. And that created a sort of “epidemiological pump,” says Dr. Salman Keshavjeedirector of the Center for Global Health Delivery at Harvard Medical School.

“Some people had tuberculosis,” he explains. “It spread through the jails and into the jails. And then they went back to their communities, of course, when they were released. So the TB came back into the communities as well.” Tuberculosis rates have soared, he says, including in parts of Ukraine, which regained its independence the same year.

Thanks to government resources, Ukraine has since worked hard to rebuild its TB treatment infrastructure, recording a decade of declines between 2010 and 2020. But then COVID hit. Lockdowns at the start of the pandemic closed hospitals where routine screening would take place.

“Sometimes it was impossible to control patients for TB,” says Dr Olha Konstantynovska, the doctor who currently lives with her extended family outside Kharkiv.

Without proper testing and treatment, when TB did show up and people came to the hospital, they would be in poor condition – underweight, agonizing cough, bleeding in the lungs.

In 2020, the percentage of people receiving treatment dropped dramatically, from 75% the previous year to just over half. And now, in many parts of the country, the war has turned everything upside down.

Not only Ukraine, but also Russia

In the chaos of battle, diseases find opportunities, disproportionately affecting those on the margins of society. Dr Salmaan Keshavjee says, “In those times of deprivation resulting from war, being refugees, being crowded, not having enough food, etc., your TB rates go up.” This is not only true of Ukraine.

“I have spent many years working [with TB] with the prison and other populations in Russia,” says Keshavjee. “I fear that many of them will die. I guess they are trying to maintain their TB treatment programs. But Russia is under sanction. As funds and things are diverted to other efforts, you will see the supply of drugs going down.”

For now, the Ukrainian stock of tuberculosis drugs is sufficient, provided that they can be distributed. For example, in Kyiv, Dr. Vasyl Petrenko, head of the department of physiatry and pulmonology at the National Medical University of Bogomolets, says Russian attacks on the city are limiting treatment options for patients.

When he can make his rounds, he tells his patients not to worry. “We are going to win,” he reassures them. “Victory will be ours.” He says it’s crucial for morale. “It gives a lot of power, energy to every person here.”

The question is, how long will his optimism last?