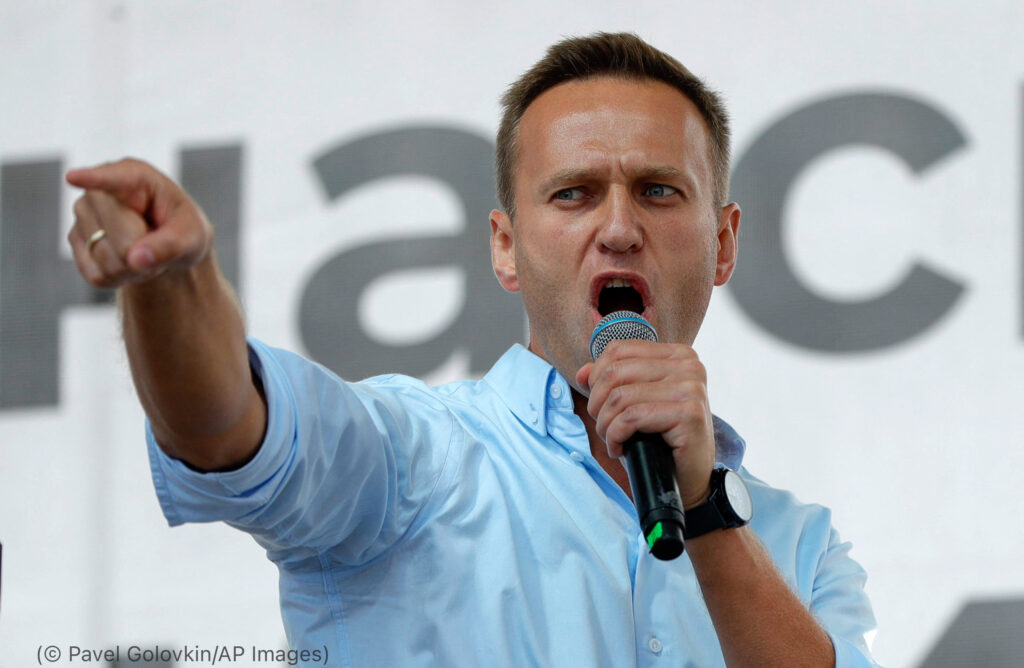 Russian opposition activist Aleksey Navalny gestures as he addresses a crowd during a political demonstration in Moscow on July 20, 2019. (© Pavel Golovkin/AP Images)

This article is part of a series describing how the Russian government and Vladimir Putin cover up their involvement or that of their allies in chemical attacks against civilians around the world.

When a prominent political activist in Russia dared to challenge President Vladimir Putin, he found himself poisoned with Novichok, a military-grade nerve agent developed by the former Soviet Union.

In August 2020, Aleksey Navalny fell seriously ill on a flight to Moscow from Tomsk, Russia. He was taken to hospital in Omsk after an emergency landing. Two days later, Navalny was airlifted to a Berlin hospital, where he recovered.

In September 2020, German lab technicians concluded that Navalny had been poisoned with a nerve agent from the Novichok group. The poison was similar to that the Russian military intelligence service (GRU) used against Sergei Skripal in a 2018 assassination attempt in the UK, where Skripal lived as a citizen. This attack landed Skripal, his daughter Yulia and a British officer in hospital and resulted in the death of another British citizen months later.

Independent national laboratories in Sweden and Finland and the Organization for the Prohibition of Chemical Weapons confirmed the German laboratory’s findings in Navalny’s case. (Learn why nerve agents are so deadly.)

In December 2020, an investigative team of independent journalists implicated Russia’s Federal Security Service in the poisoning. The team consisted of Bellingcat, a Netherlands-based investigative journalism group, The Insider, Der Spiegel from Germany and CNN. This finding was later confirmed by the United States and others.

When the poisoning was revealed, the Kremlin launched an aggressive disinformation campaign to deny that the Russian government had any role in the attack, access to Novichok or a motive to poison Navalny.

Russian officials and state media broadcast several false statements after the incident, including:

Pro-Kremlin media published more than 200 fake stories about the poisoning between August 2020 and January 2021, according to EUvsDisinfo, an EU project created to monitor and respond to Russia’s disinformation campaigns.

Allowing Navalny to travel to Germany was presented as proof that the Russian government was not involved in the poisoning.

“Whether [the security services] really wanted to poison him, they most likely would have carried it out,” Putin said in December 2020.

On January 17, 2021, Navalny was arrested upon his return from Germany and later sentenced to 2½ years in prison for a parole violation. In March 2022, he was sentenced to nine years in a maximum security prison for fraud and contempt. The fees and the convictions are considered politically motivated.

That of the Kremlin disinformation campaign on chemical weapons continues today in Ukraine, with attempts to blame others while masking his actions.

2022-04-18
Previous Post: The Importance of Myanmar’s Xinjiang and Arakan to the Chinese Silk Road
Next Post: Why the winners in Ukraine could be SpaceX, Blue Origin and Exxon