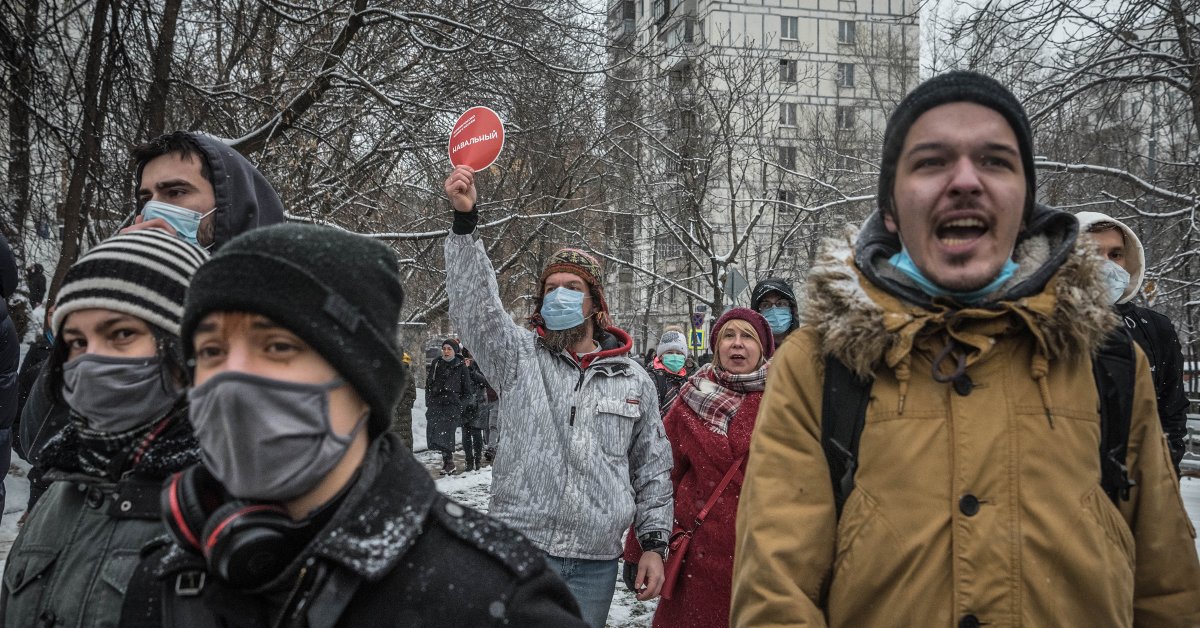 Protests in Russia are not just about Alexei Navalny

MArina Shakhov never took to the streets to express her opposition to President Vladimir Putin until recently. During the protests which began on January 23 and repeated the following weekend, the 31-year-old trade representative marched with several hundred people, braving 3F temperatures in the Siberian city of Tomsk. Just a five-minute walk from the protest’s gathering point – downtown’s Novo-Sobornaya Square – is the Xander Hotel, where opposition activist Alexei Navalny was allegedly poisoned by a powerful nerve agent in last August. protesters sung “Navalny we are with you” and “Putin is a thief!”.

Shakhov says she does not support Navalny politically but became “actively opposed” to the government last year as the economic gap between the elite and ordinary people widened. “I protested for myself and for the younger generation. I don’t want to live in a country full of restrictions, where people are afraid to speak out,” she says.

Tens of thousands of people, young and old, marched in more than 100 cities and towns across Russia in January. The turnout is unusual in a country where political protests for the past 20 years have been concentrated in major cities. To research led by social anthropologist Alexandra Arkhipova in Moscow found that 42% of them had, like Shakhov, never protested before.

Authorities have responded aggressively to protests over the past month. On January 31, police arrested at least 5,100 people nationwide, according to OVD-Info, a Moscow-based NGO group that monitors political arrests, surpassing 3,700 detentions across Russia over the weekend. previous.

The protests were sparked by the January 17 arrest of Navalny, the country’s best-known opposition activist, on his return from Germany. Another driving force was his viral video expose, posted to YouTube on January 19, claiming that a lavish palace on the Black Sea coast had been funded by members of Putin’s inner circle with $1.3 billion in illicit funds. dollars (the Kremlin has denied these claims). Navalny – who was sentenced to two years and eight months in prison on February 2 in what is widely seen as an attempt by the Kremlin to silence him – has become a rallying point for many grievances over the 20-year rule of Putin.

Alexandra Tokareva, 24, from Moscow decided to join the protests for the first time because of Navalny’s poisoning and the attack on free speech she says it represents. “I realized that something is wrong in our country. If Navalny could become a victim for speaking out, I could become one too,” she says. “I really believe it and I want to live in a better country,” she adds. Before, she believed that the protests could not change anything. But now she hopes that even if the protests cannot bring about domestic change, they will lead to more international pressure on Russia.

But Navalny is not the only source of inspiration for the widespread protests. Arkhipova has mentioned that Russians are “unhappy with the economic situation, which has worsened due to the pandemic, [and] unhappy with the lack of government support during the pandemic. Unemployment is at its highest since 2012 and the economy in 2020, hit hard by the coronavirus pandemic and a drop in demand for oil, suffered its biggest contraction in 11 years. The Kremlin’s Covid-19 support package accounted for just 4% of gross domestic product ($54.3 billion), less than a tenth of the aid provided by the United States, Italy and Italy. Germany. Meanwhile, support for Putin’s Just Russia party fell to an all-time high of 30% in November, and currently stands at 31%. according to the WCIOM public polling institute.

Last year, Putin passed a series of controversial constitutional amendments – in a referendum critics called fraudulent – ​​that could see him stay in power until 2036. The move sparked protests in Moscow and in St. Petersburg, involving hundreds of people.

Some 5,100 people were reportedly arrested across Russia on January 31, including more than 1,600 in Moscow, pictured here.

But economic inequality is the reason people are most unhappy with Putin, according to to research by an independent Moscow-based pollster, the Levada Center. Some 45% of respondents blamed Putin for “not ensuring a fair distribution of income for the benefit of ordinary people” in 2018, up from 39% in 2015. In Russia, the top 10% own 83% of the country’s wealth, making it the most unequal of the world’s largest economies, followed by the United States and China, according to Credit Suisse Research Institute in 2019.

Shakhov says she wasn’t “surprised” by Navalny’s claims in her investigation of Putin’s palace and believes those close to Putin live an equally decadent lifestyle. “Yet the elderly don’t have the money to retire. They don’t live, they survive. There is not enough money to help seriously ill children recover. Apparently they are not worth living,” she said.

Protests erupted across Russia. In Yekaterinburg, a city 880 miles east of Moscow, Ekaterina Karaman says Navalny’s numerous investigations into corruption prompted her to protest. “Everyone already knows that the government steals. State institutions collapsed long ago, we see the failure of power with our own eyes; in hospitals, schools, institutes, police stations, municipal administrations. It’s the whole system that needs to be changed,” says the 28-year-old artist.

She was optimistic about Putin until 2008, she says, when a vote the Council of Europe ruled defective put Putin-backed candidate Dmitry Medvedev, then first deputy prime minister, in the president’s seat. Under Medvedev, Putin served as prime minister until 2012, when he became president again. “It became clear that we don’t have the freedom to vote,” Karaman said.

In September 2017, the artist became a Navalny supporter after seeing him speak to a crowd of people in his hometown during his 2018 presidential bid (Navalny was later banned from running due to a 2014 embezzlement conviction, which he says was politically motivated). “He spoke with people. This practice is very unusual in Russia, where politicians stay away from the people and never speak openly,” she says.

A protester is arrested in Moscow on January 31.

These protests were unusual in that they drew protesters of all ages to the streets. Victoria Ivleva, 61, a photojournalist in Moscow who also protested, says that in the mid-1990s Russia was “almost a free country…you could say and do whatever you wanted”. But over the past two decades, Putin has passed legislation limiting the freedom to protest, calling NGOs traitors and “foreign agents”. dismantling of independent mediaand increase in censorship online and in the education system.

Ivleva says that in the ten years she has been actively protesting in Russia, she has never seen so many officers wearing different uniforms trying to control recent protests. “Some of them were police, some of them were OMON [riot police] some of them were something else. I do not know what. They were like ants everywhere. It was a horrible picture,” she said. “I said, ‘why did you send so many armed and military people because we are peaceful? Why are you so afraid of us? “, she adds.

The photojournalist says “it doesn’t matter” that Navalny’s political goals didn’t motivate her to protest. “Of course I want him released. Nobody has the right to poison a human being. If we can use Navalny to protest against other kinds of ideas, why not participate?” she says.

Shakhov, like many who have protested recently, plans to march again. But the duration of the protests is uncertain. One of Navalny’s top lieutenants, Leonid Volkov, would have said in Moscow Time his supporters would not protest again until later in the year, to build momentum for the September legislative elections.

It is certainly unlikely that Putin will be dislodged by this episode of unrest. The Kremlin maintained control over society when tens of thousands of people, mostly in Moscow, protested for political reform in 2012, and again when thousands gathered corruption in at least 90 cities in 2017.

Still, Shakhov isn’t losing hope just yet. “Either the protests will grow,” she says, “or the authorities will continue to achieve their goals through arrests, fines, intimidation, and people will go back to tolerating and being silent. “.