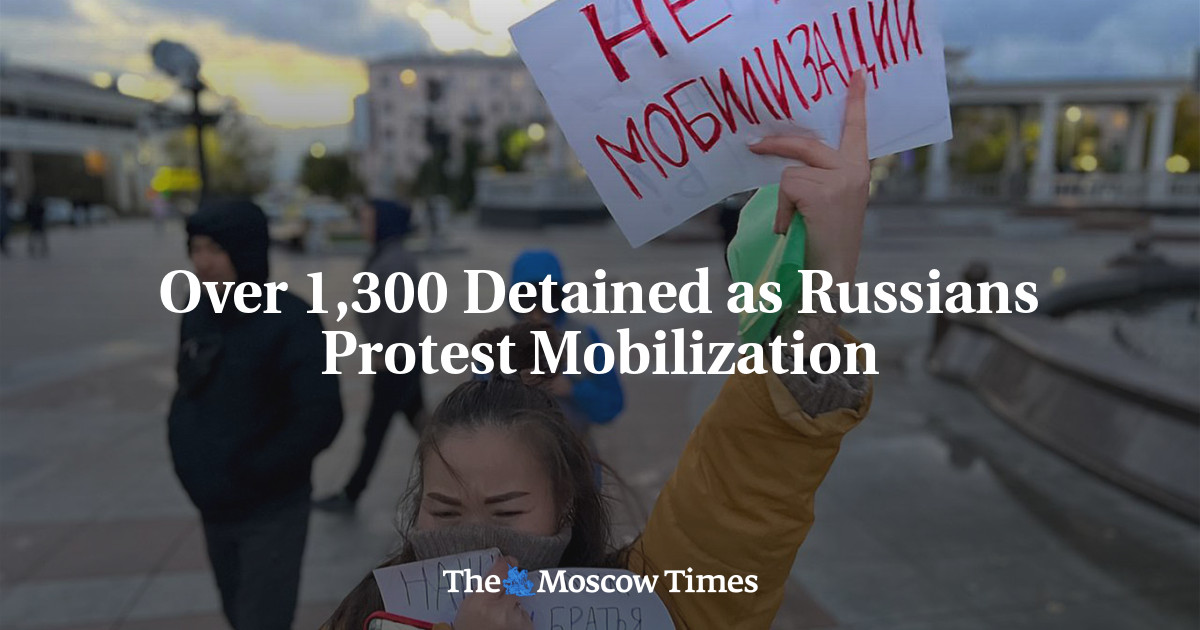 More than 1,300 people were arrested across Russia on Wednesday as rallies against a military mobilization declared by President Vladimir Putin for war in Ukraine took place in areas from the Far East to the capital Moscow.

According to independent police monitor OVD-Info, at least 1,386 protesters were detained nationwide so far, with at least half the tally recorded in the capital Moscow.

He added that the majority of those detained were women.

Moscow police reportedly issued summonses to some detainees at the military enlistment office, regardless of their experience.

The Vesna opposition movement as well as supporters of imprisoned Kremlin critic Alexei Navalny called Russians across the country to take to the streets on Wednesday night to oppose the Kremlin’s decision to build up its forces in Ukraine through a “partial” mobilization.

The first protests took place in cities across Siberia and the Far East, where dozens of people were arrested, often just minutes after the rallies began, according to local reports.

Protesters in Ulan-Ude were seen carrying handwritten placards reading “No War! No mobilization! and “Our husbands, fathers and brothers don’t want to kill other husbands and fathers.”

Protests against the mobilization are taking place in several Russian cities today, mostly small-scale actions leading to a handful of arrests. The woman’s placard reads “No to mobilization” pic.twitter.com/EbytXN2OQF

In the Siberian city of Tomsk, a protester carrying a sign reading “Kiss me if you’re scared too” was among 15 people arrested shortly after the protest began, according to the local Telegram news channel Ulitsa Barkhatnaya.

In Novosibirsk, Russia’s third largest city, video published on social media showed a protester shouting “I don’t want to die for Putin or for you!”

Demonstrations then took place in the cities of the Russian Volga-Ural region. At least 45 people were arrested in the region’s largest city, Yekaterinburg, while dozens more were arrested in Perm, Chelyabinsk and Ufa, the capital of the republic of Bashkortostan, according at OVD-Info.

In the capital Moscow, several hundred people gathered in the central Stary Arbat street amid a heavy police presence. Protesters could be seen chanting “No war!” “Send Putin into the trenches!” and “Let our children live!” in videos posted on social media.

At St. Petersburg, demonstrators who gathered near the central St. Isaac’s Square were quickly surrounded by police, according to videos from the scene. But others continued parade through the city center.

Do you think, do you need more information? Потому что они — заградотряд. pic.twitter.com/FD3mBfs7GK

Rallies were also held in the Far North city of Arkhangelsk, the southern city of Krasnodar, the Baltic enclave of Kaliningrad and others.

In Kazan, the capital of the Republic of Tatarstan, a small group of protesters marched through the central streets chanting “Peace to the world. No to mobilization! after the dispersal of the initial gathering.

A total of 300,000 Russian reservists are expected to be called up for military service during the campaign, according to Defense Minister Sergei Shoigu.

But the mobilization efforts could be more advanced given the vague wording of the mobilization decree, according to human rights lawyer Pavel Chikov, who helps Russian soldiers opposed to the war.