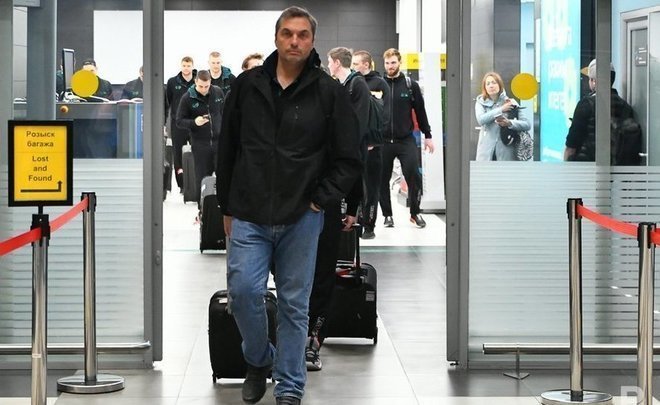 Interview with the head coach of the Sintez water polo club — RealnoeVremya.com

The defending champions of the country – Sintez water polo players – have returned from vacation and have started training. The head coach of the team Revaz Chomakhidze spoke with the sports team of Realnoe Vremya during a live from the newspaper.

“The club’s management has decided to rejuvenate the team”

M Chomakhidze, what changes happened in the team and how did the preparation for the new season start?

The offseason turned out to be longer than usual. However, the guys had a chance to rest well and now they have started training. Today the team is at its base at the Orgsintez swimming pool, and we will most likely stay in Kazan until the end of the first training stage. We’ll just have practice matches with someone before the Spartakiad of the Strongest, which is due to start on August 20. But it has not been confirmed yet because it depends not only on us but also on our sparring partners. After a more or less successful season last year, the club’s management decided to rejuvenate the team but at the same time to focus on the students of the water polo school in Kazan by giving them the opportunity to showing off in Superleague matches, they didn’t have such a chance earlier. This is necessary to get information on their preparation for big challenges, including international competitions in the future.

In particular, goalkeeper Yevgeny Kostrov, players Igor Bychkov, Alexey Ryzhov-Alenichev and Roman Shepelev left the team. Shepelev will continue his career at Spandau 04, Berlin. I heard that Ryzhov-Alenichev retired. As for Igor Bychkov, I heard that a Greek club was interested in him. I don’t know how the talks ended, nor do I know what Kostrov’s future plans are.

After a more or less successful season last year, the management of the club decided to rejuvenate the team but at the same time to focus on the students of the water polo school in Kazan

The question of players in goal makes sense with Igor Chirkov. Or has Vladislav Sergeyev from the second team already joined you?

Yes, we have two young guards. Moreover, Chirkov is already a member of the Russian team, and the promising Sergeyev gives us the basis to assume that this position is complete.

Will the water polo players who left Sintez participate in the Spartakiad of the strongest of the Tatarstan team?

As a coach, I would not recommend the club management to invite those who left for the tournament. I think the changes that have happened are very important for the future of the club, therefore, it is necessary to start working with the current team. But it is my personal opinion which needs to be confirmed at a general meeting of the club.

As for the changes in the other teams, these are only rumors for now. Judging by them, a lot of changes have happened, a lot of information is coming. But now I don’t even know which system the next Russian Championship will use, we don’t have the information and not all the teams have confirmed their participation. I repeat that nothing is certain yet.

Chirkov is already a member of the Russian team, and the promising Sergeyev gives us the basis to assume that this position is full

Regarding the Spartakiad of the strongest, I contacted representatives of the Krasnoyarsk Krai team, and I was told that half of their team will be made up of students and the other half is the second team that took part in the Russian championship. I think other teams will do the same. Does this mean that the Spartakiad can be transformed into a professional competition made up of teams of masters and pure amateurs?

This seems to be true, which is why the teams will turn out to be very different. It certainly won’t be a high-level competition, but regardless of which team is at the Spartakiad, we should start testing our new squad composition. Moreover, there will be several strong teams anyway like in the country championship. We will prepare and do our best.

Of course, the question is not for me, but I agree that we will certainly miss playing practice that we would like to compensate (Editor’s note: here it should be noted that Russia will miss European Cup competitions for the first time in many years).

On the other hand, if the players of the Russian national team took part in the world championship, they would now be preparing for the European championship and you would have to start the first camp with a very small team.

Absolutely. Fortunately, the junior school works wonderfully in Kazan, thanks to which we have two teams in the country’s championship. So if we lacked players for training, we would compensate them with young players, which could be an opportunity for me to give them more attention.

“The future season will be one of the biggest challenges”

Both politically and economically, Russia is beginning to cooperate with Asian and African countries. Speaking specifically of water polo, with whom could we cooperate on these continents?

When we go beyond the national championship, it is difficult for me to approach these subjects. I take you back to one of my answers that it belongs to the Russian Water Polo Federation. Regarding the players in our team, I can say that the coming season will be one of the biggest challenges in the careers of many water polo players, which will be linked to a serious shortage of playing practice. question will be topical for the head coach of the national team, and the federation must try to solve these problems by organizing in one way or another more high-level matches. It is difficult for me to say with whom we will cooperate at the international level, but I have sketched the general vector.

Let’s move on from Russian issues to international issues. The World League has ended, What did you look, What do you think on the tournament?

I don’t want to be very critical but I will assume that there hasn’t been any top level water polo yet either in the World Championship or in the World League due to which the latter tournament seemed to be mediocre. Here, it must be explained that the European Championship is fast approaching, and this is a priority for many teams. That’s why teams change, sometimes leaders were left to rest, new players were tested, that’s why tournament results don’t show the real situation of water polo in the world. This is the reason for a number of extraordinary results.

The future season will be one of the biggest challenges in the careers of many water polo players, which will be linked to a serious shortage of playing practice

In addition to Revaz Chomakhidze’s interview, I would like to remind you that there was the Spartakiad draw for the strongest in water polo which left a number of questions. Obviously, Astrakhan, Volgograd, Moscow, Moscow Oblast, St. Petersburg and Tatarstan were going to participate in the men’s tournament. But where do the teams from Krasnodar, Krasnoyarsk, Rostov-on-Don, Chelyabinsk come from? Who are they? And why does the official website of the Russian Water Polo Federation call Krasnodar Krai oblast?

President of the local regional federation Alexander Chaschin answered Realnoe Vremya’s question about the Krasnoyarsk Krai team: “Our team will consist of water polo players from Krasnoyarsk and Norilsk who participated in student and junior Spartakiads at different times. We don’t have the first team, it’s a sore point, so after graduating from sports schools, the guys go to regions where they can continue playing water polo: Moscow, Kazan, Petersburg. This is how our region feeds the strongest centers since 1961, I am one of seven players from Norilsk who played in one of the first teams of Sintez Kazan, I studied at a local institute.

Although there are plans to create a professional team at the Siberian Federal University where mainly students will play. The situation is similar in Krasnodar, Novosibirsk, Tomsk, Chelyabinsk.

Yes. Alexander Chaschin, Vilor Erlich and their five compatriots helped train Sintez in the 70s. That is why we are concerned about Krasnoyarsk Krai, which is no stranger to water polo Tatarstan, and hope that in in turn a team will present itself there. By the way, according to rumors, the departure of the Rostov Oblast team to the Spartakiads of the Strongest will become a kind of presentation of a new pro team organized in this region.

The author’s opinion does not necessarily coincide with the position of the editorial board of Realnoe Vremya.