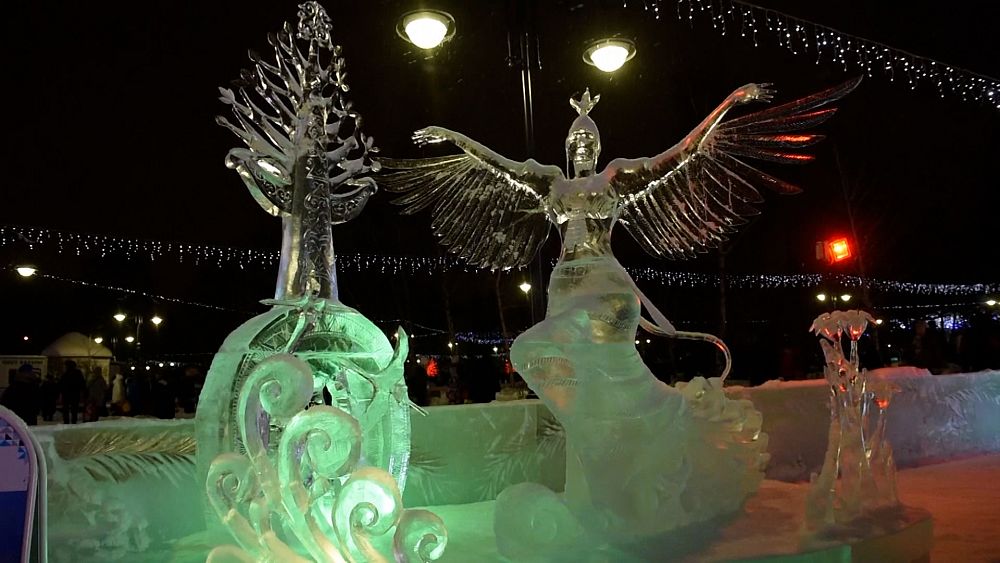 Ice sculptors transform a Russian town into a winter wonderland

Festive illuminations illuminate the central square of the Siberian city of Tomsk.

Next to a New Year’s tree, sixteen large ice sculptures decorate the site.

The works were created as part of the Crystal Tomsk ice sculpture festival which took place from December 12 to 18. This is the seventh time the festival has taken place in the Siberian city.

The theme of this year’s competition was “Folk Art and Intangible Heritage”.

Sculptors have used fairy tales, myths, epics and proverbs as inspiration and themes for their frosted creations.

The master ice carvers worked from 9 a.m. to 9 p.m., some stayed overnight.

On Monday 13 and Tuesday 14 there were frosts in Tomsk and the temperature dropped to -25 degrees Celsius during the day.

This did not hinder the work of the craftsmen, but getting used to the temperatures was a challenge for some.

Another challenge was the amount of ice needed to create the entrees.

To create the sculptures, 376 blocks of ice with a total mass of 156 tons were prepared.

Each team received 8.5 blocks of ice to make their sculpture, each block weighs around 500 kilograms each.

Each team created a large sculpture and a small one. The small sculptures were made during a “blitz” tournament held on December 12.

The festival ended on Saturday, December 18.

First place – and a certificate of 100,000 Russian rubles – was awarded to sculptors from Yakutsk, the RoK team, who made this sculpture, named “Heavenly Mare”.

The second prize was shared between the Leko team from Yakutia with the sculpture “autonomous stove” and the Plantation team from Khabarovsk with the creation “Flight of the bumblebee”.

2021-12-20
Previous Post: Sergei Samborsky fled to Georgia after checking into Covid hospital
Next Post: Putin on NATO and how China’s main ally will overtake the United States