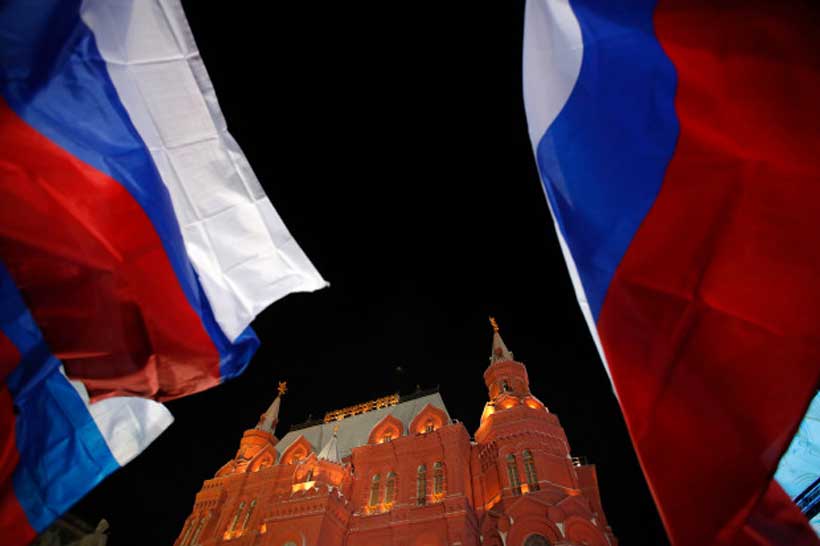 Geopolitical war of the West against Russia: the Ukrainian case

On February 15, the Civic Chamber of the Russian Federation hosted an international conference “Western Geopolitical War Against Russia: The Ukrainian Case”. During the event, political scientists, experts, journalists and public figures from Russia, the United States, Italy, Germany, Finland, Belgium and other countries discussed possible developments around Ukraine.

Democracy Research Foundation director Maxim Grigoriev reminded the audience of Colin Powell’s accusations that Iraq has nuclear weapons, which launched the US attack on Iraq, and the massive disinformation campaign by the Western press against Syria. Grigoriev was a member of the commission that visited the Syrian city of Douma, where, according to some Western media, government forces carried out a chemical attack against the civilian population, which served as a pretext for Washington to launch another missile strike.

“I was personally in the same house and the same entrance where video footage of deceased people was allegedly filmed,” said Maxim Grigoriev. “We interviewed the people who lived there. None of them were injured. We have described this information war against Syria and the activities of the White Helmets group in detail in our book.

The situation in Ukraine that has developed over the past eight years has much in common with US informational provocations against Syria.

“As you know, the shelling of the civilian population of Donbass, whose victims include women and children, is qualified by international humanitarian law as war crimes,” Grigoriev stressed.

Director of the Center for Geopolitical Expertise Valery Korovin stressed in his speech that the massive information campaign against Russia is a clear proof that the United States is interested in a new war and is preparing for it . American and European experts discussed the reasons for the geopolitical war of the West against Russia.

“The fact is that from a geopolitical point of view, Washington needs this war for several reasons,” Korovin explained. – Firstly, this war will very seriously alienate Russia from Europe and create a large number of problems in the construction of Russian-European relations, including the construction of a geopolitical axis. Second, Washington certainly needs some sort of common enemy. There was a time when the United States lost this enemy. They were entrusted with international terrorism, then Islamism, assimilated even to fascism. Now such an enemy is again made from Russia.

Another reason for the aggressive policy of some Western countries towards Russia, Korovin sees in the need to consolidate the NATO bloc, which has lost all meaning without a clear geopolitical adversary, in whose role the USSR played. The policy of sanctions and pressure is also one of the elements of the geopolitical game of the United States with Russia.

Alexander Malkevich, general director of the St. Petersburg TV channel, drew the attention of conference attendees to negative propaganda against Russia that has swept Western media and social networks.

“We have already been convicted,” Malkevich said. “We have been accused of everything before and in this new reality we must respond, including through legislative means. Our media was destroyed in Estonia, destroyed in Latvia, almost completely eliminated from all Russian-speaking thought in general in the same Ukraine. We see what is happening with RT Deutsch, there is already an investigation into RT France etc.

With this information war against Russia, Washington is mainly solving its economic problems, Malkevich is sure. In the United States, record inflation, 2021 has been a complete failure for the Joseph Biden administration, both in domestic and foreign policy.

“With every new information about Russia’s imminent attack on Ukrainian territory, there is a wave of news about the need for new sanctions, the stopping of Nord Stream 2 and the correctness of sending troops and weapons Americans in Europe. We understand why this is being done,” Malkevich summed up.

Italian publicist Eliseo Bertolazi noted in his speech that when the United States wants war, it always achieves it, as evidenced by the experience of Yugoslavia, Iraq, Libya, Afghanistan and Syria. However, the United States is afraid to fight directly with Russia, but will do so indirectly through Ukraine, “to the last Ukrainian soldier”. For the US military-industrial complex, this will be a very profitable business, as it considers its role as an arms supplier. The West does not care at all about the number of human casualties that will result among the Ukrainian civilian population.

According to the expert of the International Eurasian Movement Daria Platonova, the war scenario currently playing out in the geopolitical space of Ukraine serves to break the bridges of interaction between Russia and Europe. The current situation is a struggle between two worldviews.

Continuing the theme of values, Finnish political scientist and journalist Johan Beckman drew the attention of conference participants to the fact that Russophobia is common in the West today. And this is very visible in the media. Mass russophobia started in the Baltic countries, when they decided to ban Russians from speaking Russian. They don’t even get a passport. That is, Russians do not have the right to be citizens, despite the fact that they have worked all their lives, paid taxes and lived in these countries. Then it got to the point that Russians were forbidden to have their own monuments, at least remember the “Bronze Soldier”, Beckman said.

Similar processes are currently underway both in Ukraine and internationally, as in the Olympics they are trying to ban the use of Russia’s flag and anthem. According to the West, Russia has no right to exist at all, expressed a Finnish political scientist.

Italian philosopher, Russian speaker Mauro Beraldi recalled who is behind all Ukrainian domestic and foreign policy.

When there was a coup in Kyiv called Euromaidan, Barack Obama was the President of the United States and Joe Biden was the Vice President, Wendy Sherman was the Under Secretary of State for Political Affairs. Victoria Nuland distributed cookies at the Maidan. Afterwards, Nuland proudly announced that the United States had invested $5 billion in the cause of “freedom for Ukraine.” With Biden’s arrival, the globalists have taken over, and his entire former Ukrainian team is back on track. We see Wendy Sherman and Victoria Nuland again, and Ukrainian troops are once again gathering near the borders of Donbass, the expert notes.

The worsening of the situation around Ukraine benefits the American financial elites. Unfortunately, they are moving forward. We must respond to the information war with a culture war. We have brains, they have money. Let’s see who is the strongest,” concluded Mauro Beraldi.

Political observer and former US policeman John Mark Dugan, who served for several years in the US Marine Corps, explained what he thinks is the reason for the current deepening of the geopolitical space around Russia.

“The Biden administration simply needs a new Cold War to satisfy the appetites of the Pentagon. American politicians are investors and shareholders of the biggest arms companies, so they have a financial interest in supporting conflicts around the world, regardless of the loss of life,” Dugan said.

Among the biggest contracts, Dugan mentioned the supply of hundreds of tons of weapons to Ukraine, a contract for 250 Abrams tanks to Poland and 64 F-35 fighter jets to Finland.

The United States never respects geopolitical agreements that are unfavorable to it, the expert noted. Washington only understands an open show of force, as was the case during the Cuban crisis. The worsening of relations with Russia is a direct consequence of the deep crisis in which the United States found itself under Joe Biden, underlined Mr. Dugan. Ukraine, on the other hand, is of interest to the United States only from the point of view of a constant threat to Russia and the pumping of natural resources. Dugan concluded.

During the conference, Italian directors Luca Baraldi and Maya Nogradi presented their film about the Donbass titled Quiet! There is a performance”, pointing out that today in Europe it is almost impossible to find funds to film objective documentaries about what is happening in the Donbass.

2022-02-19
Previous Post: Tomsk hospitals will purchase six “Tianox” devices for patients with COVID-19
Next Post: Russian 3D printer will be tested on the ISS in 2022 – Parabolic arc