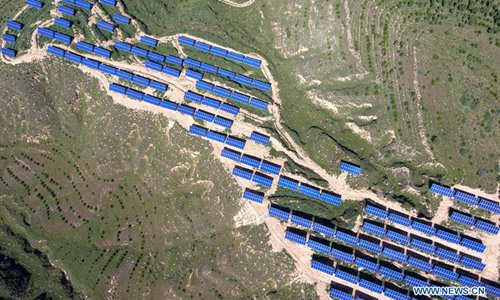 A research team of Chinese and Russian scientists recently developed a cost-effective and environmentally friendly way to increase efficiency in converting sunlight into hydrogen energy, a method that could help Russia and China usher in a new era of clean energy and help both countries take a leading position in the industry.

The results were published in the scientific journal Applied Catalysis B-environmental.

Scientists said they found a method to modify the microstructure of carbon nitride (an important photocatalytic material) by treating carbon nitride with water at high temperatures to form porous nanolayers of oxygen-containing molecules.

Raul Rodriguez, a professor at the Research Faculty of Chemistry and Biomedical Technology, Tomsk Polytechnic University, said carbon nitride is a promising and inexpensive material that can be easily synthesized from urea or other nitrogen-carbon compounds by high temperature reactions.

“After the steam and high temperature treatments, the material will have better performance in generating hydrogen from sunlight,” he said.

Sino-Russian energy cooperation is rapidly becoming one of the biggest areas of bilateral cooperation.

Sino-Russian bilateral trade in 2021 grew 35.9 percent year-on-year to $146.8 billion, surpassing the $140 billion threshold for the first time, an all-time high, according to official data. The two countries have set a goal of reaching $200 billion in bilateral trade by 2024.

2022-06-09
Previous Post: Novichok poisoner linked to Putin strike team ‘disappears and may have been murdered’ – World News
Next Post: McDonald’s Russia becomes ‘Tasty and that’s it’ (Vkusno i Tocka)